Messages from our RBAPS farmers 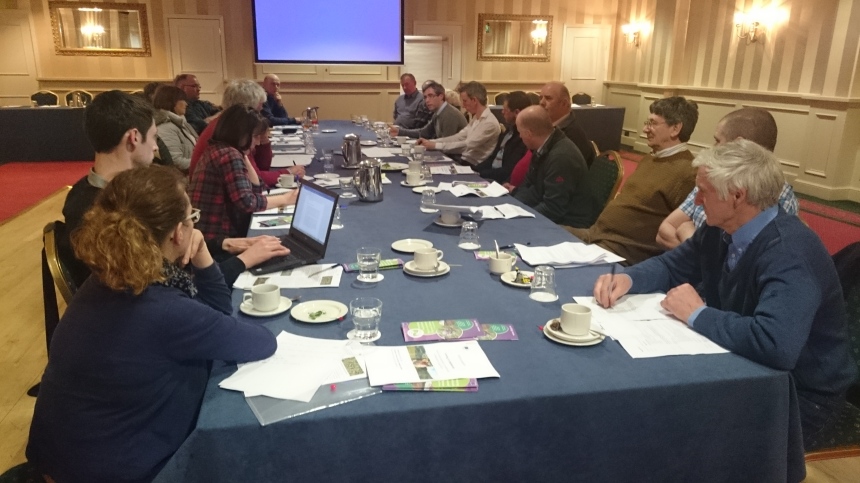 In advance of our RBAPS seminar in Brussels on March 30th, a meeting was held with participating in Ireland.  16 Farmers attended (7 from Leitrim and 9 from the Shannon Callows). We had a great discussion (almost 3 hours!); lots of interest in how agri-environmental schemes need to be designed going forward.  We had mostly positive messages about the RBAPS pilot with everyone attending the meeting wanting to see this approach going forward (on a whole farm scale).  There were also a few concerns raised.  The following covers the main points raised by the farmers themselves:

Farmers want scheme elements to be within their control, and take account of local conditions and external factors, such as weather which can affect their final score.

Where natural constraints (i.e. wetter parts of meadows aren’t as species rich as drier areas) may make achieving the top score difficult, some farmers see this as a potential disadvantage and expect a well-designed scheme to take this into account. Other farmers indicated that they would accept that natural constraints mean they cannot achieve top scores.

In general farmers understand the link between the score as the indicator of quality, and the payment level (however, see the points above regarding scores).

Some farmers suggested a well-funded prescription-based scheme might be more attractive than a results-based scheme.

Farmers in Leitrim felt that this scheme (or other AES) can’t compete with forestry grants being offered (which will also impact upon the biodiversity objectives in HNV areas). For example, forestry annual payments are paid at much higher rates, are tax free, are paid over longer periods (15 years) and farmers who afforest can still claim Pillar 1 basic payments on this land.